Not much, and certainly not on here.

So it’s again been a long time since I blogged about anything, but hopefully that should change in the next few days and then back again for the year or so. Some interesting stuff has happened to me in the last year, although most of it in the last couple of weeks.

I bought a house, well kind of. I’m buying a flat, and I’ve exchanged so there’s no going back now for either me or the seller. Completion is on the 24th Jan 2014 so, in a week Friday, I get the keys and I can go about arranging a new boiler, possibly new central heating, a new kitchen, furniture, and the pieces I’m really looking forward to, a new big screen TV and if I can be bothered, a coffee table with a touch screen in. Well I need a remote for the TV right?

Another thing that happened, in the last year is I’ve been looking into Bitcoin. Pointless I know, but I’m solo mining using a 2GigaHash/s device (given the network is currently running at 1.8 PetaHash/s I will take on average 10 years to hash a block with no difficultly increase). I first saw Bitcoin years ago but never put any stock in it, sure wish I had now, but I was too young to make that sort of a decision/purchase. A colleague at work reminded me of it in August last year and shitting hell I wish I had gotten into it then, £100 per BTC jumping to over £1000 in a few months. Oh well, water under the bridge. I’ve got a little bit to say on Bitcoin that should probably go in another post so later for more… maybe.

And the last thing I did of significance is decided I want to row around the equator. Not literally obviously, there’s a lot of land in the way, but figuratively. I figure there’s only 40,000 km of it, shouldn’t take that long right? Hopefully my rowing machine can cope with that sorta millage, you’d think it would. I’ve come up with an ingenious way to break it down and see progress on it and hopefully I can document it reasonably well too.

Other little things have happened, I bought a ps4, I’m not buying an Xbox One, I’ve decided PC games are the way forward. I got introduced to World of Warcraft and rapidly got bored, I think it’s a more communal experience not so much with randoms on the servers but with people you actually know but the only person I know on there is already a high level and is too busy with that.

Oh, one last thing. I googled this blog today, got to page 11 without seeing a single link, which is understandable it’s all pretty common usage words, lose one and it’s a very common phrase. The interesting part though, one picture of my GameCube project is always getting spam, hundreds of messages of it, searching “Gamecube fan subassembly” and there it is, images search result No. 1, no idea why but apparently that picture is popular somewhere, who knew.

So, “long time no see”, I think to my blog. Been a long time since I planned on being more frequent. Again success!

More importantly, I have been thinking. Thoughts in my head, I believe, mull around by themselves for a while before surfacing, as they always seem to be fully formed when they do. I’m also a bit tipsy on far too little alcohol.

Cloud stored content, simple premise, you pay an amount of money, usually significantly less than a retail boxed physical copy, and you can download some content of some form wherever and whenever you like. Be it games from Steam, music from Google Play or comics from ComiXology. I partake in all these and to be honest, for the most part I find the services to be great and just what I want, but what happens when they go belly up?

ComiXology got me thinking along these lines, not because I expect them to disappear, but because I think they would be the most likely of the lot to do so. The thought really has spawned from Microsoft and the Xbox One. To start, I’m probably not going to buy one, I’ve really fallen out with console gaming on the basis of graphics. 6 months past the PS4 and Xbox One releases they’re are going to be outstripped by PCs in every way. That’s just the way the world works, and between Microsoft’s desire for single user licenses (that’s actually good in my opinion, if only they had done it right) and the lack of dedicated content to a platform, there is no value in the new Xbox. Also it looks like an Atari, just missing the wood veneer, I have one of those already. Nintendo are a different story, I find their consoles quite innovative, but that’s another discussion.

Cloud stored content is good in many ways, I can access my things anywhere with an internet connection and usually from a broad range of devices. In the case of Google Play Music I can listen to my own music from CDs or other mp3 downloads without taking up space on my mobile device. The other benefit is that it reduces costs, a game bought through Steam, just a few weeks after launch is usually 2 or 3 time less expensive than a physical medium copy, and this is because they can assign the copy to you, I can’t share it without sharing my Steam account with someone, and even then they could lock it down theoretically so only one internet connected client could use it at once. This is why it can be cheaper, your mate wants to play, well he’s got to buy his own copy. Where as they used to get one £40 payment for a physical media that could be shared around tens of people potentially they now get a £10 payment from all those people. They get more money, we get cheap games, everybody “wins”. (Obviously consumers as a whole haven’t won as we’ve paid £10 x every person over 4 that would have shared that one copy)

My problem is with the future. In 5-10 years time, I may think, “Yeah, I’d really like to play that old game” and find that, although I paid for the right to play the game, the provider has disappeared, or ceased support. This to my mind is an issue. What happens when a company no longer supports something you paid money for. I mean fair enough, Microsoft are pulling support for XP, it’s over a decade old, you should have upgraded by now, but what happens when they do the same for the Xbox One? All my Xbox One titles I bought over their online market just disappear? The goods I bought from you just stop existing and you keep my money? How is that fair.

It’s not is the obvious answer. I’ve not read the EULAs, let’s face it, how many people have. I think I may have read the Steam EULA once before, but I don’t remember anything about end of life and I sure as hell haven’t kept up on any updates to it. To my mind, when you buy a game or music, or comic, or anything from an online retailer who is giving you cloud access to something which you can not get a physical DRM-free copy of from them, they should be prepared to provide this service forever, or at a future point in time give you a DRM-free copy of the software with sufficient notice for you to collect. If you lose that then it’s as though you have lost the physical media, in which case I am happy to say, screw you, should have looked after it better. But that’s just my opinion on it and I bet more than likely, sometime in the future, hundreds, if not thousands of pounds worth of content I have paid someone for is going to just *poof* and be gone forever.

Well I bought a tablet… but not any tablet, the ASUS TF300 Transformer Pad. I’ve wondered for a while why people liked little useless laptops, netbooks if you will, and now I understand the draw. I’ve been walking around all day with the TF300 and it’s nice to hold, light and not too small to use. But more than that, rather than the shitty netbooks that are underpowered for windows or run linux with next to no support for any useful programs it comes preloaded with a load of pretty useful software that interfaces with Microsoft Office files.

So as a laptop it’s pretty good, fully featured, resonably powerful and with a 15 hour battery life you don’t need to carry around charging cables which is a big plus. That’s all well and good, but what’s next is better, it’s a tablet built by ASUS, running android from Google, so it has access to everything Google are throwing into their Nexus 7 available straight after a software upgrade as soon as you connect to the internet. In fact the only thing its missing the 15 quid free credit on the play store, which if you know all you need to do is log into the play store with your Google account on a Nexus 7 to get it, isn’t a big deal so long as you’re planning on walking past an electronics store in the near future.

As a tablet it feels nice, it’s a little heavy but not so much that you can’t hold it and use it, just so that you’ll know you’ve put it down when you do. It’s plastic case doesn’t feel flimsy or cheap, and an added bonus over the Transformer Prime’s metal case it doesn’t block the internal GPS. It does flex a little if you press try and make it flex behind the screen but its barely noticeable in normal use. The 10.1″ screen is a great size for watching videos even though it is only 1280×800, but unlike the Nexus 7 it also has a mini HDMI output.

I can see why some people would prefer the Nexus 7, being half the cost is no small part of that, but not taking cost into account the Nexus 7 with it’s smaller size it’s more portable and I’d suggest much better for reading books and magazines etc, however if you want a device to take on holiday or on the tube to read, why wouldn’t you buy a Kindle. With the paper display and much higher battery life I’d much prefer one over the Nexus 7 for reading, the only down side is it wont work without light as it has no backlighting.

All in all, I can completely understand why someone would buy the Nexus 7 over the TF300, but i’d say you will have made a mistake.

I’ve always been confused by the html/css box model. I can never put my finger on what it is specifically, but it never works how I expect it to. Anyway, about an hour ago it clicked for a second so I thought I’d draw a diagram so I could remember it for more than 10 seconds. The problem I find with a lot of diagrams is they don’t actually say what each part does. Saying that, I totally remember seeing a diagram just like this in the past. 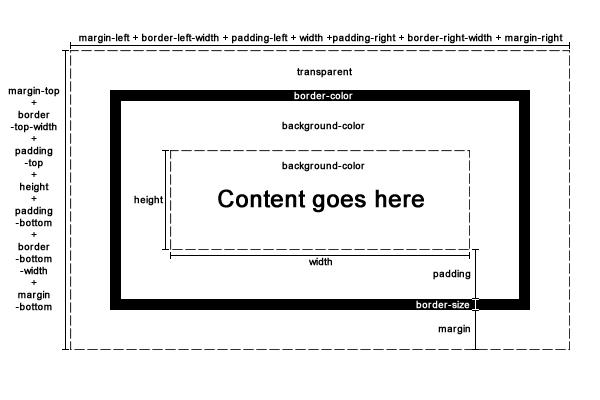 Now all I need to do is lean how to do graphic design I guess.